Before you deploy to a production environment, you need to know whether or not your app is compatible with the versions of the other apps that already exist in that environment. The old-fashioned way of managing these dependencies involved deploying sets of pre-tested applications together, creating a bottleneck and meaning that speedy development and testing on one application may be negated by slow development and testing on another.

The Pact way of managing these dependencies is to use the Pact Matrix - this is the matrix generated when you create a table of all the consumer and provider versions that have been tested against each other using Pact. You can view the Pact Matrix for any pair of applications by opening /matrix/provider/PROVIDER/consumer/CONSUMER in your Pact Broker. 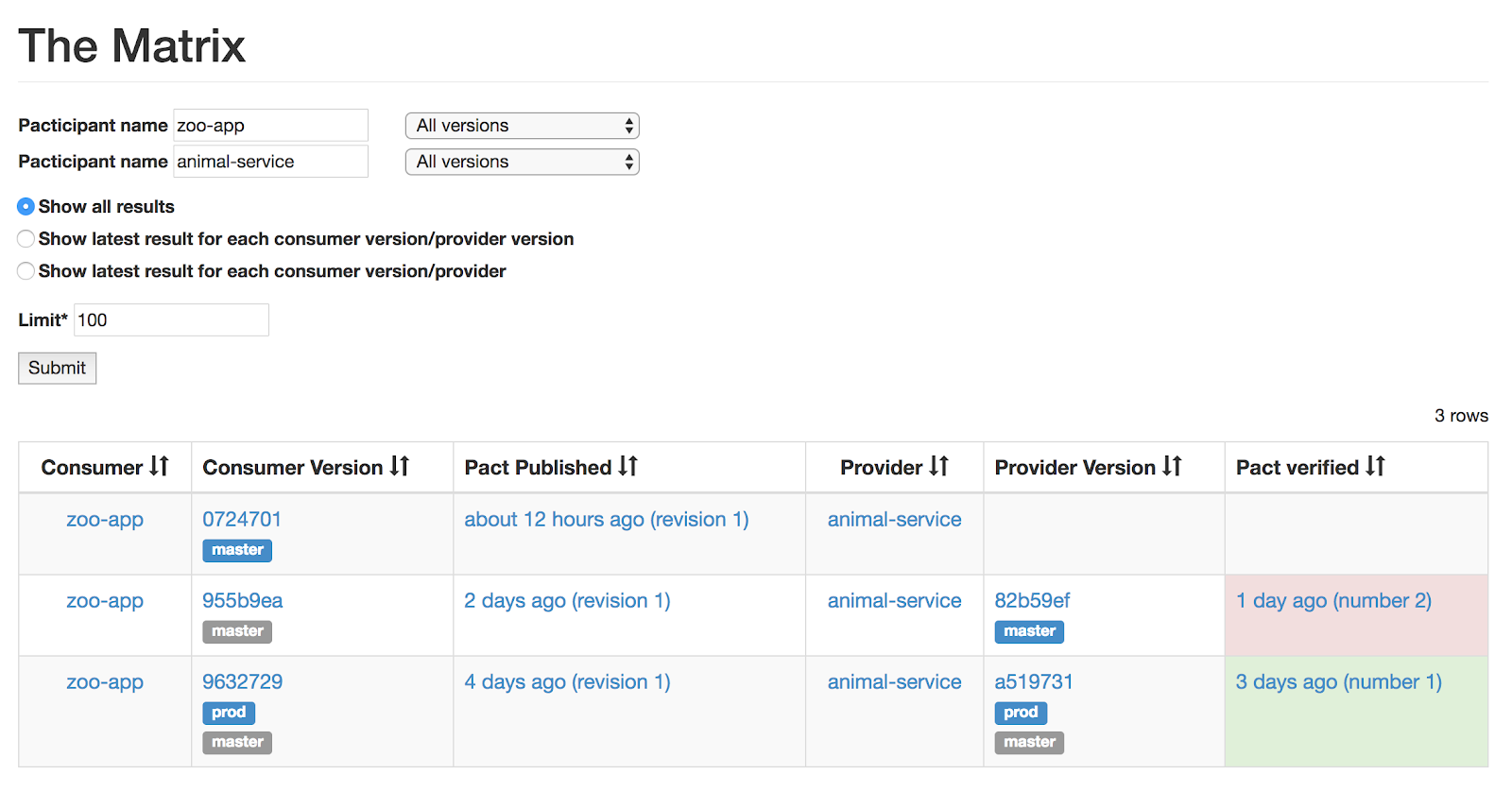 One very important thing to note is that a verification is associated with the pact content itself, not with a specific consumer version. This means that if a pact does not change between publications, any previous verifications are automatically be applied to the new pact publication, effectively “pre-verifying” it. (For this reason, it is best not to use any random data in a pact, as this will cause the broker to consider it a new revision of the pact.) Linking a verification to the pact content rather than to the application version also means that we can do a “cartesian join” of pacts/verifications, resulting in many more "compatible" versions than would otherwise be the case.

The need for this check increases proportionately with the time that elapses between your pact test execution and your release. If you practice continuous deployment, and you go straight from a test build into a production deployment build, then you can be pretty sure that the version of the other application that is in production probably hasn’t changed in the meantime. If there is a considerable amount of time, however, it is best to do a compatibility check again just before deploying.

For example, if you run a pact verification on Monday that verifies the recommended "master" and "production" pacts, but you don’t deploy the provider artifact until Friday, the version of the consumer that is now in production may have changed.

Another reason that an extra "safe to deploy?" check is required (as well as the verification tests themselves) is that when the pending feature is enabled to ensure that newly changed pacts do not break the provider build, the build will not necessarily be breaking any more to let you know of an incompatibility.

The can-i-deploy tool is a CLI that has been written to query the Matrix to ensure that you are safe to deploy. You can read a detailed description of how it works here.

Setting up a Pact in a "universal" CI/CD pipeline#

Some organizations have standard CI/CD pipelines that all projects use to release. In this situation, it can be tricky to introduce the verification/can-i-deploy steps because some applications will be using Pact and some won't. can-i-deploy will return an error if you try to use it to deploy an application version that it does not know about, and (depending on the configuration options avialable in that language) the verification step may also fail if there are no pacts to verify.

If you are using a shared standard pipeline, the easiest way to make sure every application can be deployed without having to do checks to determine if Pact is or isn't being used for this particular application is to register every application version in the Pact Broker at the start of the pipeline, using the create-version-tag command from the Pact Broker Client CLI. You will need to use the --auto-create-version flag and set the tag name to the name of the branch.

If you want to pre-create the "pact changed" webhook for providers so that the first time a consumer publishes a pact, the webhook is immediately triggered, you can use the following commands in your pipeline.