Normally we think that a particular version of our code is attached to only a single version of a pact.

But when you introduce configurability, such as with feature toggles, that is no longer the case. A team may be working on a new feature that makes use of a new parameter, a new response, or an entirely new endpoint or concept in a contract with a provider.

Before you turn that toggle on in a specific environment, you want to know whether it's going to work.

One of the great tools of feature toggles is that you can target the toggle to a subset of your users. If a team is working on a new feature, they may want to turn it on just for the product team, or for a select set of early adopters. Very often you want to roll it out slowly across your user base and keep an eye on your application and business metrics.

This essentially means that a single deployment or release of your software contains multiple versions of your application. This is not always easy to get your head around, but it's very important to understand.

The implication of this is that a given deployment or release may use or need to support multiple versions of a pact between a consumer and a provider.

With this in mind, it becomes clear that using the git hash (which represents the code version) to version an application for Pact may not be sufficient. If your application can consume or provide different versions of the same pact with the same code version, you need to provide a version identifier that is unique for each specific version of a pacticipant that the code supports.

Let's define an "active feature toggle" as one that could potentially be turned on in a particular environment.

If you have a single active feature toggle that can be on or off, say featA, this is simple enough. You would create a version identifier which is the code hash + a unique feature identifier, say ef567ab+featA. You would also have a "base" version identifier for when all toggles are off, which would just be the git hash, or ef567ab. We will call the base identifier the base version, and the identifiers with toggles turned on toggle versions.

However, you likely will have multiple features under active development. The code will behave slightly differently for each possible combination of feature toggles. If you have ten different active feature toggles, that would be 10! or 3,628,800 different version identifiers.

So we need to either throw our hands up or find some simplifying assumptions.

First, we only care about which active feature toggles use a different version of the pact. Secondly, if we turn on two different toggles at the same time, they are not generally going to change how each one interacts with the contract separately. So, except for very rare cases, we don't have to worry about combinations of toggles.

So generally we only need a separate toggle identifier for each active feature toggle we know uses a different version of the pact from the base version.

When it is time to run consumer tests for a given version of the code, we now need to run the tests for the base version as well as for each toggle version that we know uses a different version of the pact (for example a toggle that adds a parameter or uses a new API). We then publish the resulting pact using the appropriate version identifier. 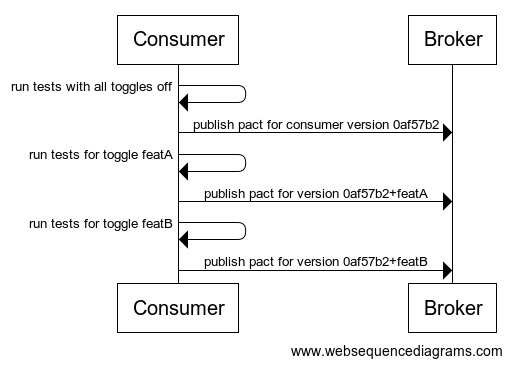 Marking a consumer with the branch name​

You can decide on your policy if some but not all the toggles pass for a given code version. You may decide it's ok to merge the code into your main branch as long as the base version passes, and you will prevent failed toggle versions from being turned on. Or you may decide all toggle versions have to pass before you can merge.

When a consumer publishes a new version of a pact, we want to trigger a provider verification for that version.

OPEN QUESTION: are we supposed to run verification for each provider feature toggle that changes the behavior of the contract?

For simplicity's sake, we will call both deploying a version to a runtime environment or releasing code to customers as a rollout.

Marking a version as deployed or released to an environment​

The whole point of feature toggles is to be able to roll out features independent of a code rollout. So with this in mind, we may want to implement a process where a particular toggle version isn't marked as rolled out to an environment when the code is rolled out. Instead, we only mark the base version with that environment name.

If we instead have a system where a toggle can be turned on manually, it may be safer to mark all toggle versions with the environment name when the code is rolled out.

Note that we need to mark a toggle version with an environment name when it is on for any segment of users, no matter how small.

NOTE: because we can have multiple active versions in the same environment, you will need to change your uses of record-deployment to record-release.

Prior to turning on a feature toggle in an environment, we want to make sure it's safe and won't break a contract.

This is done with can-i-deploy, but our previous assumption that we can just look at the latest version of a consumer or provider marked with that environment name no longer holds. There can be multiple active versions in an environment - the base version for sure, but also a toggle may be turned on for some segment of users in that environment.

If you are using tags, you can check for all versions marked with a given environment using the --all TAG option.

If you are using record-release, you can just allow the Pact Broker to automatically determine the dependencies by using the --environment <environment-name> option

By using -all TAG or --environment, the Pact Broker will check all active versions for that environment, and can-i-deploy will pass only if all of them have been verified successfully.

Turning off a feature toggle in an environment​

Most teams using feature toggles build a policy whereby once a toggle is fully rolled out, they remove the use of the toggle from their code.

As you roll out the code where the toggle has been removed, you will want to have a process to remove the toggle from the environment.

If you are using tags, you can use the Pact REST API to delete the tag